Recently I've been going through my old Hard Drives and organizing old art files. While I've lost many files to various crashes over the years, I'm occasionally surprised by something I find. However a lot of that old art makes me cringe! I keep wanting to fix things, of course that would get crazy time consuming. Some artists rework old art to great success, and some lose the charm of their old work, I don't know where any attempts to revise, improve, or rework any of my old art falls, but the temptation at times is too strong.

Especially when it comes to work I did for my card game Dungeoneer I made almost 20 years ago. The reason is some of that had such a tight deadline I was doing 2 or 3 cards a day, when I should have been spending at least 2-3 days per card or more.

This was a character called War Angel during production, the card ended up being called Frost Bound Celestial. I reworked it, gave her some appropriate clothes for the weather, and tweaked some other things. She also fits in nicely with the Norse Mythology themed project I've been working on. She could be Rota: Valkyrie of Sleet. 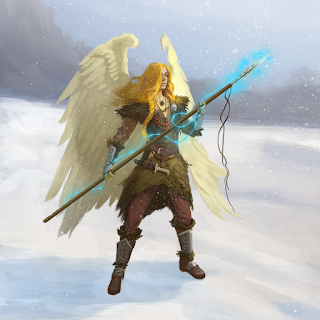 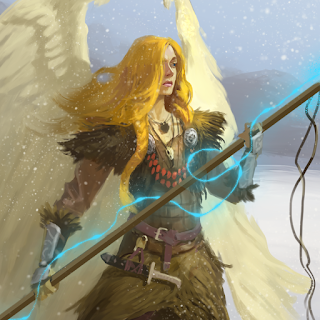